Perhaps the most polarizing personality in all of professional sports - Michael Vick. The people who love him stand behind him unconditionally. Those who hate him, hate him without compassion. Those in the middle seem to be buying the philosophy that "He paid his debt. It's time to move on." And if that was the case, it would make the debate a little more intellectual and a little less emotional. But did he really "pay his debt"? Therein lies the biggest bone of contention. 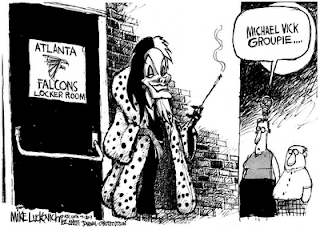 In August of 2007, Vick entered a plea of guilty to a federal racketeering charge for promoting gambling across state lines for his ownership and sponsorship of the dog fighting concern known as "Bad Newz Kennels". He was sentenced to 23 months in prison of which he served 18 months before being released to finish his sentence under house arrest. No one disputes this. Vick served time for illegal gambling, which is more than Pete Rose ever did. All well and good.

In November of 2008, Vick struck the plea bargain that is the basis of much of the controversy that surrounds the NFL quarterback. Commonwealth Prosecutor Gerald Poindexter made the imprisoned Vick an offer he would have been crazy to refuse. In return for a guilty plea on a state dog fighting charge, Vick would be given a three year suspended sentence and all other charges would be dropped. So without ever serving a day in prison on any of the state charges, Vick was allowed to step out of federal prison and back on to the gridiron, after having his "indefinite" suspension lifted by NFL commissioner Roger Goodell. 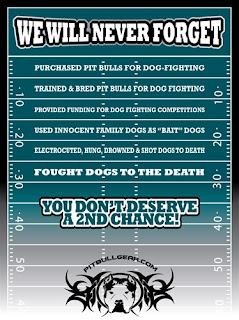 Let's look at the law in the Commonwealth of Virginia. A charge of animal cruelty that does not result in the death of an animal is a Class 1 misdemeanor, which carries a sentence of up to twelve months. 51 dogs were seized from Michael Vick's compound at 1915 Moonlight Road in Smithfield, VA. Many of these dogs bore the scars of their abuse. Others were so obviously psychologically scarred that one could say that they had had the dog beaten out of them. They no longer knew how to behave. Some still suffer these horrors today. Google "Richard Hunter, Mel" for just one of these stories. A charge of animal cruelty where the animal dies , is a Class 6 felony, punishable by up to five years in prison. Michael Vick admitted after failing a polygraph that he had personally killed "6 or 7 dogs." Eyewitness testimony makes that number much higher - at least 11. We'll split the difference and call it 9 - the number of canine bodies recovered from Bad Newz Kennels. That's at LEAST 51 misdemeanor counts of animal cruelty, and 9 felonies. That is a potential 96 years jail time for the animal cruelty charges. He served not one day. Surely the appropriate sentence lies somewhere in the middle.

Should we be concerned by the fact that the attorney responsible for pursuing the state charges against Michael Vick had represented Vick's father in a civil matter in 2003? How about the fact that one of the federal investigators claimed that Poindexter, who is black, made it clear that he didn’t like the idea of a young African American who had escaped from an underprivileged background and become something of an icon being dragged down, and he certainly didn’t want to be a part of it. Do you smell a conflict of interest yet? Does it bother you that Poindexter frequently made contradictory statements regarding the case? Is it a point of interest that just prior to a second search warrant being served on Vick's property Poindexter withdrew the warrant? Why does a prosecutor who ends up cutting a celebrity convict such a sweetheart deal seem to be acting more like a defense attorney?

Dogfighting had been an interest of Vick's for many years and he had been bankrolling Bad Newz Kennels for years before his arrest in 2007. It wasn't a "wrong place , wrong time" moment. It was just a culmination of bad behavior that included drug possession and use, sexual misconduct under the alias of Ron Mexico, and firearms possession. And Vick did more than just bankroll the operation. He was painfully "hands on" regarding the goings on at the compound.

"As [the little red dog] lay on the gro 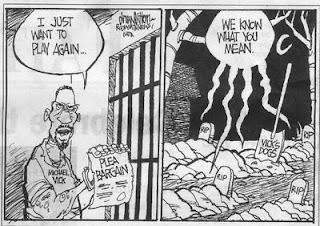 und fighting for air, Quanis Phillips grabbed its front legs and Michael Vick grabbed its hind legs. They swung the dog over their head like a jump rope then slammed it to the ground. The first impact didn't kill it. So Phillips and Vick slammed it again. The two men kept at it, alternating back and forth, pounding the creature against the ground, until at last, the little red dog was dead."

From the USDA report on the activities at Bad Newz Kennels ~

Reagrdless of convictions or time served, is it not rational to question why a man of this calibre was allowed back in to the NFL? Is this the type of person we wish to put in a position to be seen as a sports hero and role model for America's youth? Where do we draw the line?

"Paid his debt"? I don't believe it. "Served his time"? Not in my book. He has not faced justice, he has cheated it. And his accomplices in the media who refuse to hold him accountable and sweep his misdeeds under the carpet are as bad as he is. He has stated that when he was engaged in these activities, it never occured to him that what he was doing was wrong. He has admitted that if he hadn't been caught, he would still be dog fighting. Do you honestly believe he is reformed? Does it not concern you that he seems utterly incapable of any empathic feelings? This is a classic symptom of a sociopath. And those who abuse and kill innocent animals often go on to perpetrate violence against people in their orbit. I question if Michael Vick has spent his last day in a jail cell.

The bottom line is this - When you make a conscious decision to torture another living creature simply for your own amusement, you have crossed a line that can never be uncrossed. And when you make the conscious decision to summarily execute by means most foul those creatures who failed to properly amuse you while you were torturing them, for my money you have lost your seat at the banquet that is America's celebrity bounty. Unless it's along side Danny Bonaduce trying to figure out just exactly how you let it all go so horribly wrong 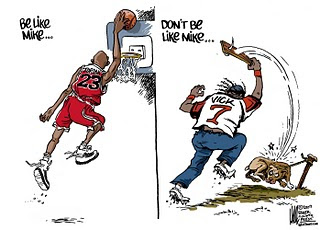